Language and Message:
Developing the Arabic script in Egypt

Travelling through the streets of Egypt, one cannot escape the overpowering role of language in the urban landscape. Words and phrases adorn buildings, vehicles, shopfronts and advertisements. Layers of time have rendered Egypt an urban palimpsest, where computer-generated fonts compete with traditional calligraphy and experimental lettering. The words on the streets are created by master artisans, graphic designers and craftsmen, and all have one common function: to communicate a message through language.

Thousands of years ago, the Ancient Egyptians were one of the first civilisations to utilise written language to communicate and preserve their existence. Their temples, tombs and papyri document royal and domestic affairs, tales of war, religious instructions, and even hymns and poems. Scribes attained a superior position in Pharaonic society where the art of writing was considered the language of the gods, closely associated with the divine. Not surprisingly, the language of Egyptians today, Arabic, is a descendant of hieroglyphics. The Arabic alphabet is derived from Nabatean, which descended from Phoenician, an offspring of the proto-Semitic alphabet. A small group of inscriptions (proto-Sinaitic) found at Serabit el-Khadim in the Sinai Peninsula  – dating back to the sixteenth century BCE – are hypothesised to show an intermediate step between Egyptian hieroglyphs and the Phoenician alphabet developed in 1300 BCE. In pre-Islamic times, the Arabic script was established in North-Eastern Arabia and flourished in the fifth century CE among the Arabian tribes who inhabited Hirah and Anbar. It spread to Hijaz in Western Arabia, and its use was popularised among the aristocracy of Quraish, the tribe of the Prophet Muhammad.

In the seventh century, Islamic conquests moved from the Arabian Peninsula through the Middle East, North Africa and the Iberian Peninsula, spreading the Arabic language and Islam. In a few decades, Arabic became a leading world language and the intellectual medium which united most of the civilised world.

Arabic calligraphy flourished into its current system of discipline and elegance during the Islamic civilisation. Under the Umayyads and Abbasids, court requirements for correspondence and record-keeping resulted in many developments to the cursive scripts, and several styles were devised to fulfill these needs. Ibn Muqlah, (Abu Ali Muhammad Ibn Muqlah, 886–940 CE, Baghdad), was one of the most accomplished calligraphers of the Abbasid Age and the inventor of the Naskh script, the first proportional cursive style of Arabic calligraphy. His development and standardisation of cursive scripts, elevated them to a place of prominence, replacing Kufic as the standard for writing the Qur’an. A balance between clarity and aesthetic was crucial to the formation of this art form, which embodies a ‘disciplined freedom.’ Calligraphy reached its peak during the Ottoman era, when calligraphers invented and perfected several styles. They refined and developed the art of calligraphy over a period of nearly five hundred years, attaining the highest level of expertise in the nineteenth and twentieth centuries.

The Khedival period of Egypt (1805–1914 CE) was marked by dramatic cultural changes, producing a visual culture that borrowed from European aesthetics. Muhammad Ali ruled Egypt from 1805–1849, and was often referred to by historians as the ‘founder of modern Egypt’, responsible for its reform and modernisation. As this cultural and economic period developed, so did the need for calligraphic applications on products, public spaces and state publications.

At first, calligraphic expressions were traditional manifestations of rule-based calligraphy (one that follows proportional standards) that reached prominence in the Ottoman era, and typography was confined to the limitations of the printing press and the rigidity of movable type.

Then the 1879–1882 Egyptian revolt led by Ahmed Urabi, an officer in the Egyptian army, called for an end to the rule of Muhammad Ali’s family and to limit the European influence in Egypt. This signalled the birth of a primordial form of nationalism, one which celebrated Egypt’s heritage and geography. This nationalism was further bolstered by the 1919 revolution against the British occupation, led by a follower of Urabi, Saad Zaghloul, and other members of the Wafd party. The revolution, along with the establishment of the Wafd party, the birth of modern archaeology and the discovery and transporting of ancient Egyptian monuments into Europe, had a significant influence on Egypt’s intellectuals. Artists and writers, in pursuit of a national identity that rejected foreign occupation, extracted iconic forms from their visual heritage to represent what it meant to be truly Egyptian, and thus moved away from the power-laden mode of visual presentation attributed to colonial hegemonic power. During that time, the Royal School of Calligraphy was founded in Cairo in 1922 by King Fouad, and can be considered the first school in the Islamic world with the goal of preserving the art form by creating a new generation of skilled calligraphers.

The creation of new political parties, rapid technological changes and development of the arts and media cultures all contributed to Egyptian society’s departure from the pre-colonial world. New image-making technologies were employed to serve political print cultures such as magazines, newspapers, banners and posters. Audiovisual industries including the film and music industries were significant components of popular culture. Industrialisation produced a consumer culture, and mass media contributed to expanding creative production. To support this, there was a need for typographic expression that the technology at the time could not provide. Calligraphers utilised their knowledge of the Arabic script and fused it with an experimental approach, creating modern manifestations of lettering that departed from Ottoman calligraphic standards. Simultaneously, many attempts at simplifying or even ‘Westernising’ the Arabic script were attempted, with the Academy of the Arabic Language in Cairo leading a number of competitions in the 1930s to reform the script in order to work with Western printing conventions. However, many of these proposals were rejected, and hand calligraphy and lettering continued to dominate popular culture.

In the 1950s, Nasser’s nationalisation of the Suez Canal, major industries and the banking sector brought Egypt closer to a vision of self-sufficiency, producing everything from the ‘needle to the rocket’, as he preached in one of his iconic speeches. This created a need for the branding of Egyptian products to reflect an identity that was distinct from the Europeanised monarchy that preceded it, and this continued through the 1960s, 1970s and 1980s, where calligraphers were commissioned on a regular basis to render shop signs, movie posters, adverts, titles of books and magazines, and even newspaper headlines.

Today, Egypt is still considered a calligraphy hub that possesses a rich tradition of education and production, currently boasting 390 calligraphy schools, annually graduating 12,000 calligraphers. Despite this, Arabic calligraphy is still endangered. Digitisation of the Arabic script has led to the decline in the demand for hand-drawn lettering and calligraphy and beautifully rendered, hand-drawn urban expressions are replaced with computer-generated fonts that are often limited in their design. A key reason for the lack of quality of Arabic fonts used for commercial purposes is the slower development of Arabic type-design in the Middle East, due to the complex nature of the Arabic script along with technological limitations in addressing this complexity. This improved a great deal with the introduction of OpenType technology in the 1990s, which allowed type designers to integrate language-specific font behaviours and honour Arabic script grammar. However, access to well-designed typefaces remains limited to expert graphic designers with exclusive knowledge of software and typography. Furthermore, there are only about one hundred Arabic typefaces available to designers today, compared to thousands of fonts for Latin languages. As a result, the visual typographic expressions on the streets of Egypt are a mishmash of various hand lettering solutions, calligraphic expressions and digital fonts.

Arabic type design continues to evolve at a rapid pace, and young type designers, aided with enhanced technologies, are shattering the limitations of computer-generated fonts, allowing them to function in innovative and groundbreaking ways. Yet despite this, there is a nostalgia associated with handwritten lettering that can never be replaced with a digital alternative. A nostalgia that is potent in urban Egypt. You can see it in the faces of the people on the street, smell it in the hustle and bustle of the traffic, hear it in the sound of car horns and street vendors, and read it in the words that adorn everything you see, words that weave the rich and complex tapestry that is Egypt. 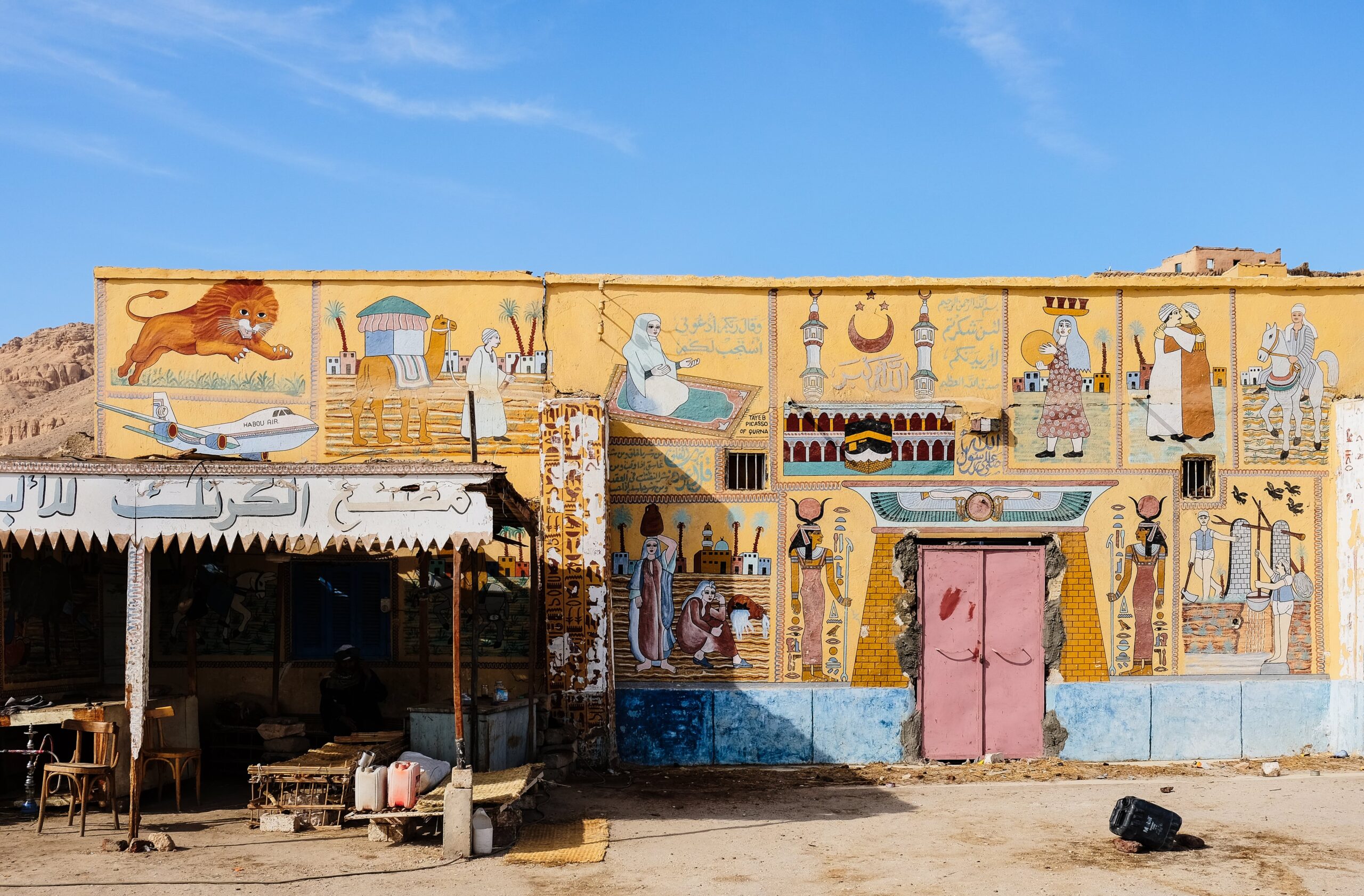 Basma Hamdy
Basma is a research-based designer, educator and author. Her first book ‘Walls of Freedom: Street Art of the Egyptian Revolution’ with Don Karl was published in 2014.
Instagram
Website
* This essay was first published in Khatt book in 2018.

The Culture of Dummies:
A Mapping of Tutorialism
Moe El-Hossieny
Over the past year, I have observed a flow of crude visual output, […]
READ